Posted on July 5, 2016 Posted By: adminCategories: 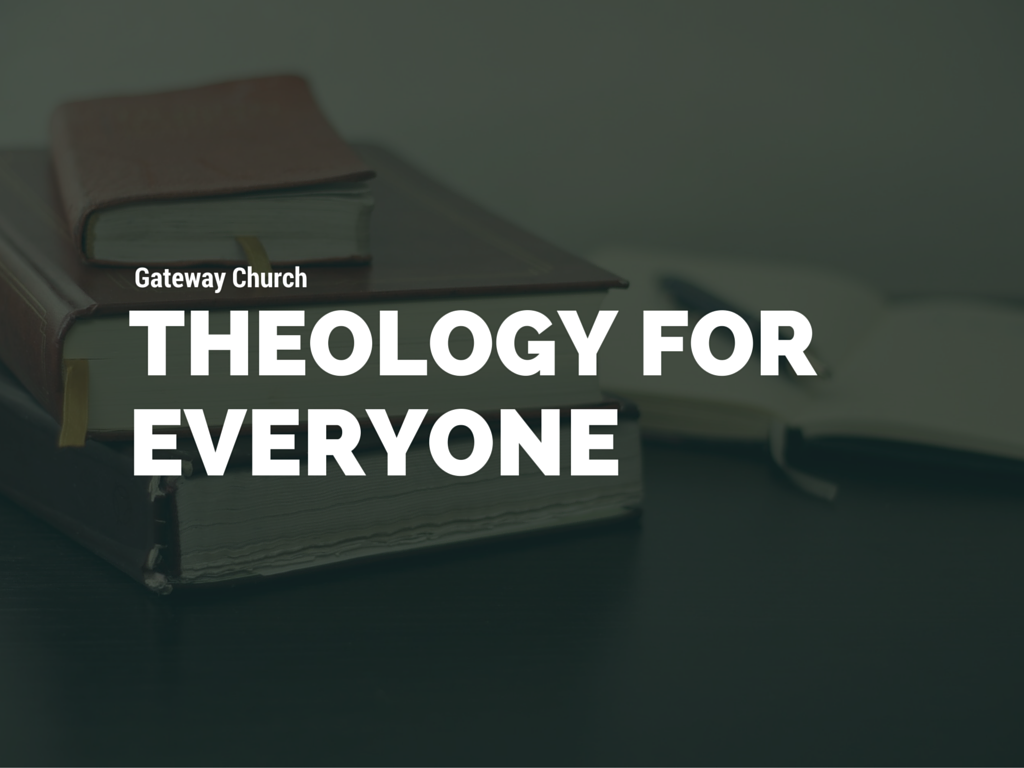 Hey Gateway! Beginning are a series of blog posts that will help us understand theological terms. You’re probably wondering, “Why do I need theology? Isn’t Jesus enough?” Great question! Theology, or the Study of God, should never be put before Jesus, but it helps us understand God a little better than we did before. I’m calling these posts, Theology for Everyone, helping to begin an entry-level understanding of concepts that are within scripture. If you’re interested in suggesting reading or want to explore the subject deeper, then links will be at the bottom of the information. – Blessings, Brandon.

Incarnation means: in flesh. It is derived from the Latin word, incaro, meaning “in meat.”

How is the word “incarnation” used?

Incarnation is used to describe how God becomes flesh in the person of Jesus.

Jesus Christ is God, in human flesh. Jesus is both GOD and MAN without losing any of His God powers.

Is this even in the Bible?

Yes! John 1:14, “And the Word became flesh and dwelt among us, and we have seen his glory, glory as of the only Son from the Father, full of grace and truth.” (English Standard Version)

We also see the incarnation in Philippians 2:6-11, “who (Jesus), though he was in the form of God, did not count equality with God a thing to be grasped, but emptied himself, by taking the form of a servant, being born in the likeness of men. And being found in human form, he humbled himself by becoming obedient to the point of death, even death on a cross. Therefore God has highly exalted him and bestowed on him the name that is above every name, so that at the name of Jesus every knee should bow, in heaven and on earth and under the earth, and every tongue confess that Jesus Christ is Lord, to the glory of God the Father.”

I didn’t even see the word, “incarnation,” in those verses. Now what?

Good catch! Each of those chunks of scripture don’t use the word, “incarnation,” but rather serve as descriptions of how God puts on human flesh and dwells among us.

Why is Jesus called “Word?”

Great question! The “Word” of God is the same thing that God used to speak all of creation into being, and it existed with God before the world begin. Scripture even tells us that the “Word” was/is God (Jn 1:1).

When the “Word,” or God,  enters the world it gets a name: Jesus!

Need a lengthier explanation of that?

If I told you about little boys, and had you not known any, you would only be able to think of all of the knowledge that you already know about little boys, but not fully understand what a boy is actually like. It’s difficult to know everything there is to know about boys without ever seeing or knowing one. But, if you knew my son, you would know his personality, his certain quirks, his affection and response to dogs, and how he runs like a wounded T-Rex. You would be given an example of what a boy is, and it would help you make a clear distinction to what a boy is not.

The use of “Word” is a way that God uses to describe Himself. It is difficult to know everything there is to know about God, especially as God is all-knowing, all-powerful, and in every place, but God took all of Himself, bottled it up, and shipped it out into the world in the person of Jesus. Hebrews 1:3 says that Jesus is the “imprint of God’s nature,” with the specific idea being that of coin making. If you worked for the Federal Reserve and made coins you’d see that molten hot metal is poured into a form or mold, and the coins would be produced and would bear the same image as its’ parent: the form. Jesus is God, in His fullest, personified.

So God has given Himself, in flesh, in the person of Jesus, to show us what God is actually like. Thus we have a clear picture, through Jesus, of what God is like, and a clear distinction of saying what God is not like. Hint: anything that is NOT Jesus would not be God.

Think of it this way:

“I don’t only create you, now I want to become you, to make my message completely clear to you.” – Bruxy Cavey

The incarnation is about God coming to earth to dwell with His people to show them how He’s going to redeem them.

Does all of this mean anything for me now?

Absolutely! The incarnation is important because it helps us to get a better understanding of God and who God is, as well as what God is doing in the world through Jesus.

The incarnation is still very important because Jesus isn’t done, yet. Greg Ogden explains this, “Jesus continues His incarnation by dwelling in His people.”

Jesus tells His followers that He must go to be with the Father in Heaven and in His absence He would send “His Advocate,” the Holy Spirit. The Holy Spirit is God who lives within us and the goal of the Spirit is to constantly push us to be more like Jesus.

On the Incarnation by Athanasius

Word Made Flesh by David McDonald

What Kind of God did Jesus Reveal? by Greg Boyd